Here we go with those who will conflate “social justice” issues with life issues as being of the same value. This kind of “seamless garment” argument does nothing but confuse the faithful and creates confusion; and Satan loves the faithful to be lost in confusion.

Bishop to Biden: No Communion in Colorado Springs Diocese. 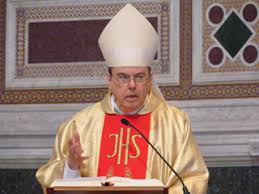 A little humor to warm us up for the post Presidential Debate analysis.

Ryan, Biden, and the Bishops.

Some Bishops chimed in after the VP debate and here is some of what they had to say from the above article. (please read the whole article if you have time)

Following the interview, the bishops weighed in with vigor:

Read more on Newsmax.com: Ryan, Biden, and the Bishops

Biden’s Catholicism is an “abortion” of orthodoxy (excuse the pun). I would like to start by making some observations that seem to me to be common sense rather than political or theological. Though common sense has become scarce in our day as Jess on All Around the Watchtower reminded me; she quipped that we should probably start calling it uncommon sense.

1st: I think that we would all agree that murder is wrong. Good.

2nd: If a political candidate advocated killing some of its citizens (not to mention the 60 million already murdered), few would support them – though there is always a small minority that would let nothing stand in the way of their agenda or ideology. You with me so far?

3rd: In order to be able to pass a law that would allow its citizenry to be killed, we would necessarily have to make sure that it is not classified as murder. Does this make sense?

4th: To classify a baby in the womb as a non-living form is absolutely necessary in order to justify a government getting involved with the issue. It is what they want us to believe, is it not?

5th: Who then should we trust with the expertise to examine this issue and proclaim when life begins? The mother, the government, science, philosophy or theology? Who is best qualified?

6th: Most who hold pro-abortion views have accepted the input of those in government, science and philosophy to declare that the fetus of a growing child is not yet a human being. Yet it is strange that people have been sentenced to jail for murder if they killed the infant in a mother’s womb without her consent. Strange that? Sounds like the mother gets to play God if she wants.

7th: Being a moral issue, would it not make sense that this should be decided by moral theologians within the church? Who else can make the call? Why should I believe any of them if they have no moral footing?

Therefore, when the Church, in my case Catholic, says that abortion is an intrinsic evil and that it is the murder of a child, then I can not for any circumstance stand with those who would willfully supply or allow for the killing of these citizens no matter what their party affiliation or ideology is.

Then there are those who say that one needs to look at all the social justice issues before deciding on whom to vote. Well then, you are saying that in simple math, the following are equal:

* You may substitute whatever floats your boat for the word “poor” in the above equation. You may even add them all together and it will still not equal the life of 1 innocent child who is murdered in his or her mother’s womb.

Now, can Joe Biden in all seriousness, say that he agrees with the Church in his personal life but does not want to force his opinion on anyone else? If he truly believed it was the murder of a child, he would die for the cause and he could never work for or support a politician or a constituency that advocated the killing of children. So what is it Joe? Are these babies that are being killed or just a clump of cells? What do you really believe in Joe?

I wish that all our Bishops would require a similar profession of faith for anyone who teaches, or acts in a role of representation for our Church. I wonder if Melinda Gates, Nancy Pelosi or Joe Biden and many other Catholic pretenders to the faith would sign or attest to such a document. They might, just to keep their Catholic base happy. A profession of faith shouldn’t be necessary as our Baptismal promises say that we believe in the One, Holy, Catholic and Apostolic Church which certainly implies obedience to ALL that the Church teaches. But, alas, it needs to be spelled out these days. Hypocrisy not to mention a lack of honor is visibly apparent in these activists who scandalize the Faith day in and day out.