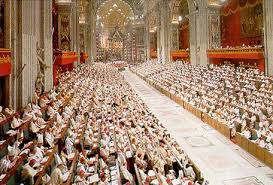 It took awhile. Vatican II was like no other ecumenical Council in history, in that it did not provide authoritative keys for its own interpretation: the Council Fathers wrote no creed, condemned no heresy, legislated no new canons, defined no dogmas. Thus the decade and a half after the Council ended on December 8, 1965, was a bit of a free-for-all, as varying interpretations of the Council (including appeals to an amorphous “spirit of Vatican II” that seems to have more in common with low-church Protestantism than with Catholicism) contended with each other in what amounted to an ecclesiastical civil war.

The Providence raised up two men of genius—John Paul II and Benedict XVI, both men of the Council—to give Vatican II an authoritative interpretation. Their teaching, carried throughout the world by an unprecedented series of papal pilgrimages, has given the Church the truth about the Council—although some Catholics seem a bit slow to get the message, Moreover, in summoning the world Church to the Great Jubilee of 2000, John Paul II gave Catholicism the Pentecostal experience that John XXIII for which hoped, thus preparing the world Church to enter the third millennium with great missionary energy: to “put out into the deep,” as John Paul II put it, of the New Evangelization.

And that, finally, is Vatican II’s message to every Catholic. Vatican II did not displace the Church’s tradition. Vatican II did not create do-it-yourself-Catholicism. Vatican II, which accelerated the great historical evolution of Catholicism from a Church of institutional maintenance to a Church of evangelical mission in a genuine and Spirit-led development of self-understanding, taught Catholics that they enter mission territory every day. The degree to which each of us brings the Gospel to others is the degree to which we understand Vatican II at its golden anniversary.